In February, a team of SAEF researchers went south to Casey Station in Antarctica to carry out fieldwork. In this series, they share their experiences traveling to this unique and special continent and offer insights into their research. 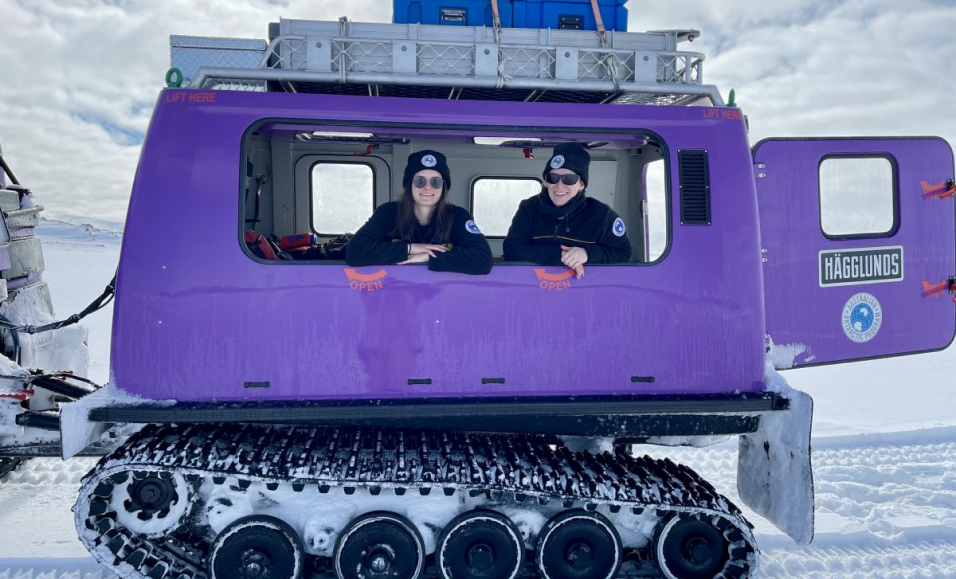 Krystal and Georgia about to set off in a Hagglunds. 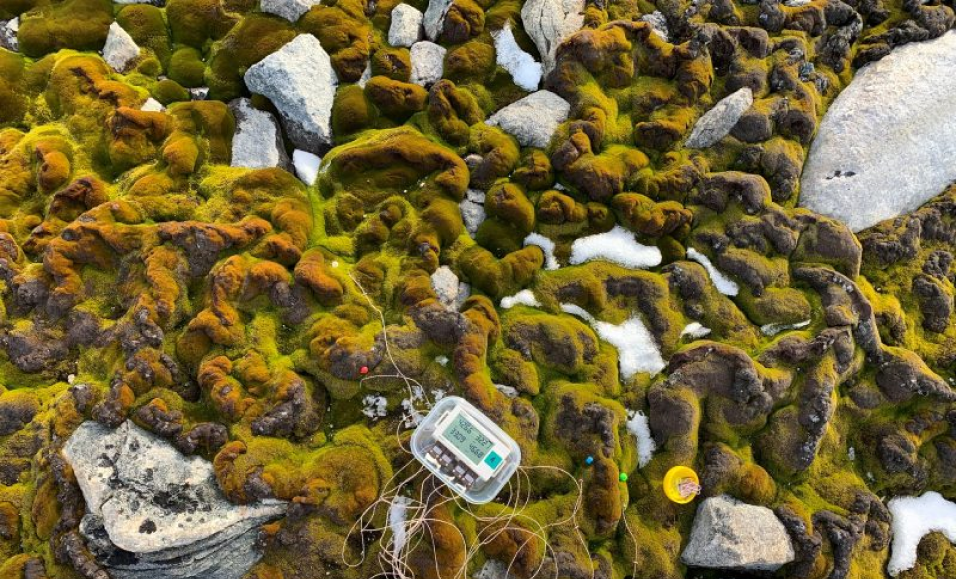 Sensing equipment is used to reveal the variation in temperature, light and moisture conditions across the moss beds. Credit: Krystal Randall 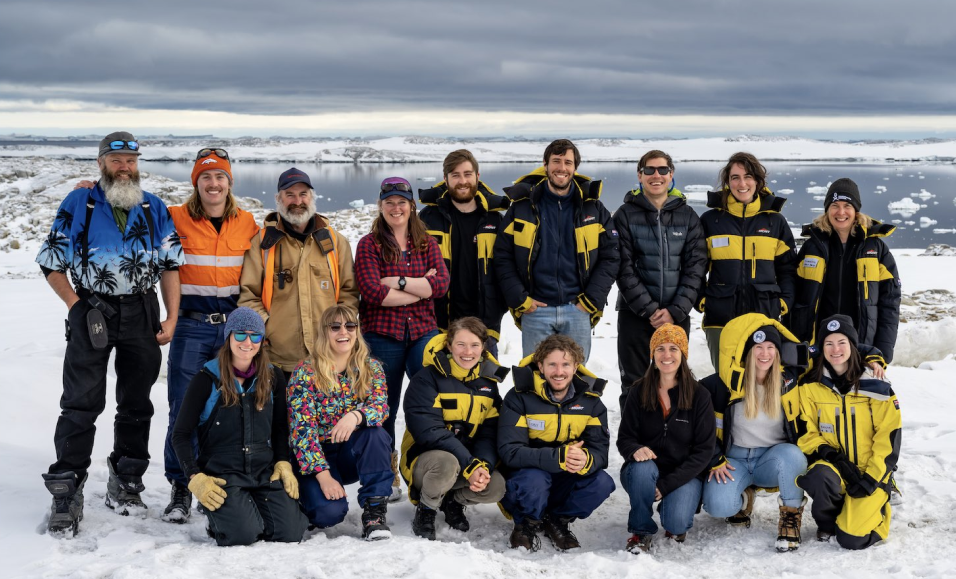 Our SAEF researchers with the wider team of scientists at Casey over summer. Credit: Barry Becker

This is the final report from Krystal Randall and Georgia Watson, who both research Antarctic moss.

Georgia, this was your first expedition to Antarctica. How was it? And what was the most unexpected thing about traveling there?

Georgia: I have had the most incredible time, stepping out onto the ice for the first time at Wilkins Aerodrome and feeling the blast of cold air on my face is something I’ll always remember.

The most unexpected thing for me was the warmth, generosity and community spirit of my station mates down at Casey. I was met with genuine excitement and curiosity when talking to people about what we were there to do and why, with so many folks passionate about science and conservation. The science truly couldn’t happen without the support of every person on station, each with a critical role, without whom we couldn’t have achieved the successes we did this season.

What is it about moss that you both love so much?

Krystal: The thing I love most about moss is that they’re so small but have such a big impact in so many environments around the globe. In deserts they form biocrusts which prevent dust storms. In cities they can reduce air temperatures, filter out pollution and have even been used to improve mental health. In Antarctica, they stop greenhouse gases from being released by thawing soil, they act as a forest where many organisms can live inside, and they physically change the environment on the ground by creating small mountains and valleys. This changes the way water and snow sits across the landscape. By doing this, they provide a range of micro-habitats for all the organisms that live within the moss, just like a large mountain range covered in forests.

Georgia: I love how surprising moss is. Whilst many people think of moss as the tiny forests that live in the cracks in their pavement, the moss beds around Casey station are huge, undulating fields of green and gold, providing structure and oases for life against the harsh rocks and snow of the icy continent.

“Antarctica acts as the Earth’s cooling system, and even small changes that occur in Antarctica can have global impacts.”

Most of the moss beds were covered in snow when you arrived. How did you manage this challenge?

Georgia: We had to plan our days around when the sun had its greatest melting potential, often leading us to work from 2pm – 10pm in the field, before heading back to the lab to store our samples. Even so, we didn’t expect as much snow as we saw this season, which led to us leaning on the ingenuity of people on station for solutions. As can be expected, the chefs in the kitchen knew exactly what to do, equipping us with scoops, spoons and thermoses to ensure we were able to carefully dig down to the delicate moss beds and, when essential, use cool water to melt the remaining snow.

Krystal, you spent time setting up a network of sensing equipment to reveal the magnitude of variations in temperature, light and moisture conditions across the moss beds. What will understanding these microclimates help us to achieve?

Krystal: There are two main goals that understanding microclimates will help us to achieve. The first goal is continuous environmental monitoring of the moss beds. The data we get from the network of sensors I deployed this season will allow us to develop a microclimate model for the area. This model will tell us the temperature of the moss canopy and the underlying soil, as well as how much light the mosses are getting. Using this data, we can monitor how much photosynthesis is going on each day and how healthy or unhealthy the mosses are, and identify areas that are at risk of drying out or becoming heat stressed in the future. Understanding this will be important for environmental management going forward.

The second goal is to generate surface-climate data that will be available for Antarctic researchers. This is highly sought after data for many research projects, however, because Antarctica is such a challenging environment to work in, and getting there is very difficult, these kinds of datasets don’t exist and researchers are forced to use weather station data instead. Air temperature, moisture, and light measured by weather stations high off the ground are very different to what is actually experienced on the ground surface by plants and animals, so by providing surface-level climate data for researchers to use instead we will be maximising the chance of better science outcomes in ice-free areas in Antarctica.

What is life like on Casey Station? What do you do when you’re not doing science?

Georgia: There is a fantastic community spirit at Casey, with a lot of socialising done in the mess hall around meals. There are four meal times a day (food is your first layer of protection against the cold) and we would sit with new people each day, learning more about their roles on station, life back home and what led them to pursue a trip down South.

We were lucky enough to get to Casey in time to watch the Summer grand finals for both darts and ping pong, with great shows of athleticism and theatrics on display from all competitors. The weekend before we flew home we were treated to the end of summer farewell party which included a Casino Royale charity auction (with over $40,000 for Deadly Science, LIVIN, Friends of the Earth, the Cancer Council and Hobart City Mission) and dance party, complete with disco ball, silly hats and DJs on the decks.

Krystal: There is a really strong sense of community on station at Casey. It’s really unique in the sense that it’s one of the only places that you’d get the chance to sit and talk with plumbers, electricians, meteorological forecasters, pilots, chefs, artists and scientists all at once. When we weren’t sciencing, there was lots of socialising to get to know the people on station and what they do, we also watched presentations and slideshows given by other people on station showcasing their work and their interesting life experiences. We had the opportunity to go to the Casey post office and to send postcards home to our loved ones, and we also got to spend some time in the hot tub after a long day in the lab. There was always something interesting to look at outside. On station there are a few places to go for a walk to see seals and penguins, or to watch the spectacular Antarctic sunsets, or to look at the cluster of enormous icebergs sitting off the coast. The light changes so much in Antarctica, so every time you see the icebergs or the sunset, they look completely different and it’s like you’re always seeing it for the first time.

What work happens next?

Krystal: I’ve got enough data to keep me busy for the year, that’s for sure! I’ll be analysing the microclimate data I collected to identify spatial patterns, and then using this to generate a microclimate model specific for the moss beds around Casey. I’ll use past climate data to run the model through time up until now and predict the health status of the mosses in different locations and then match this up with moss samples that we took in the field. Next summer I’m planning to extend on the sensors I deployed this summer, and install a newly developed automated microclimate sensing station that will be capable of sending data back to us at the University of Wollongong (UoW) throughout the year. This platform is still under development at UOW, so I will be assisting to get this completed and tested before heading back to Casey in December.

Georgia: I’m patiently waiting for our moss samples collected around Casey to clear biosecurity, then I’ll get stuck into the lab and begin to identify which species are found where. This’ll help to tell the moss’ story, as we learn more each trip about how environmental conditions are shifting as the climate changes and the ozone hole repairs.

Finally, why do you want to secure Antarctica’s environmental future?

Krystal: Antarctica acts as the Earth’s cooling system, and even small changes that occur in Antarctica can have global impacts. Because most of Antarctica is glaciated and only about 0.4% of the continent is ice free at the moment, much of the research occurring in Antarctica is focused on glaciated regions. There’s still a lot we don’t know about ice-free areas in Antarctica, particularly how they contribute to regional climate change, and how they will respond to global climate change. Ice-free areas are where almost all of the plant and animal life exists on land, so it’s really important to focus attention on these areas for protecting Antarctic biodiversity, as well as better understanding how ice-free areas contribute to climate changes in Antarctica. Securing Antarctica’s Environmental Future is a step towards securing the Earth’s environmental future, and that’s why I’m a proud member of SAEF. SAEF is leading the way through projects that focus on both ice-free and glaciated regions in Antarctica.

Georgia: Antarctica is a place that captures the imagination of so many people, many thinking of it as a pristine and untouched environment, but scientists have been observing changes in Antarctica over the last few decades and there are some bigger changes predicted. Australian Antarctic Territory covers around 42% of Antarctica, so it is crucial that Australia plays a leading role in monitoring, protecting and advocating for a future where Antarctica’s environment can be as pristine as it is imagined to be. Being a storyteller for the mosses, some of Antarctica’s smallest inhabitants, is a small but important way that I can help secure that future. 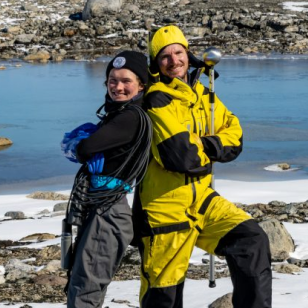 The first in our four-part series with the team. 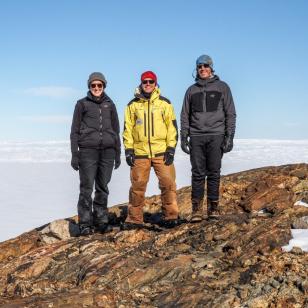 The second in our four-part series with the team. 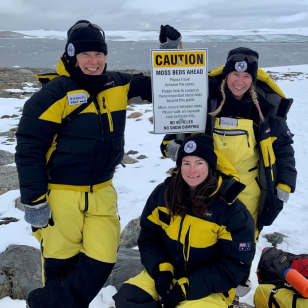 The third in our four-part series with the team.