A Summer of Science on Macquarie Island

Home » Our stories » A Summer of Science on Macquarie Island

Wondering what our team at Macquarie Island has been up too? Look no further. 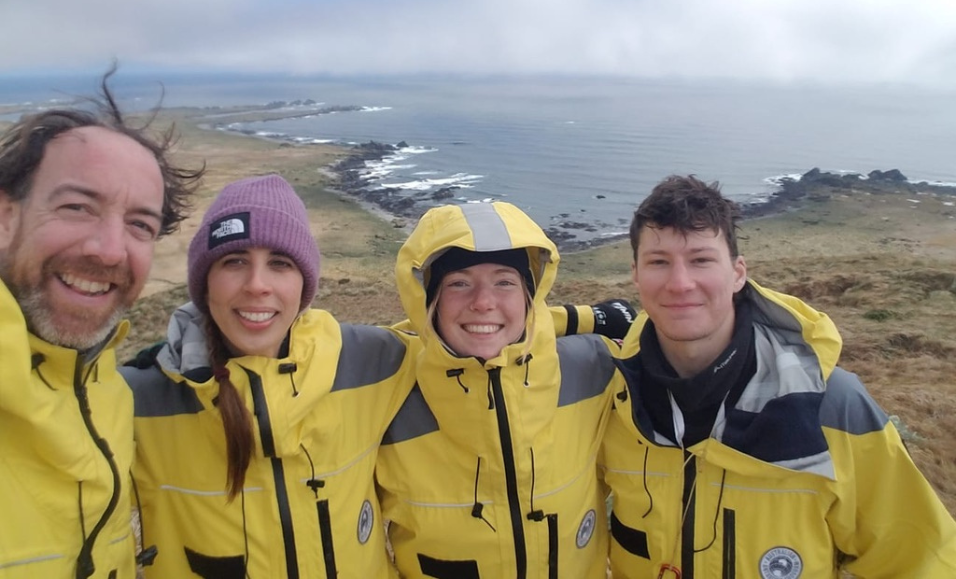 Jez, Cait, Maggie and Sam in the field. 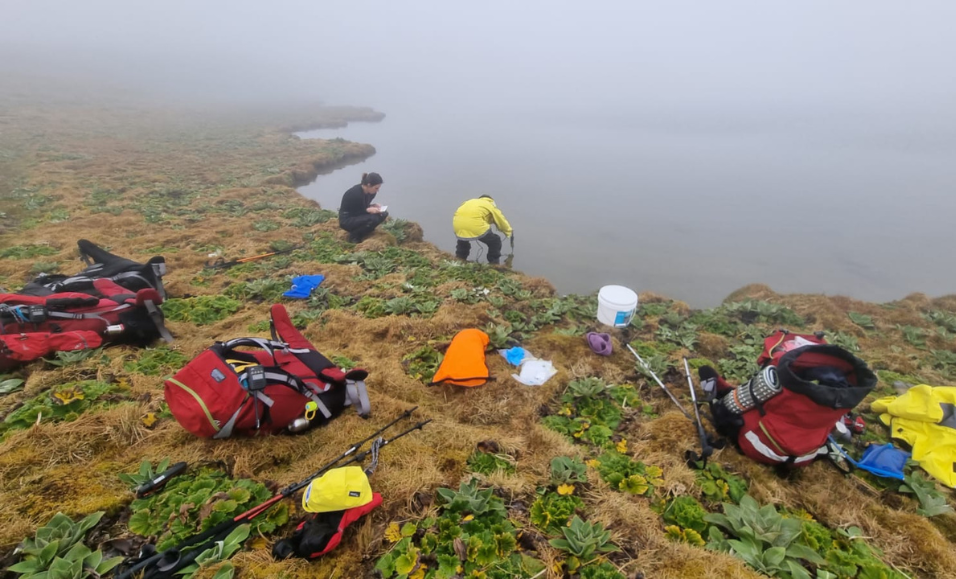 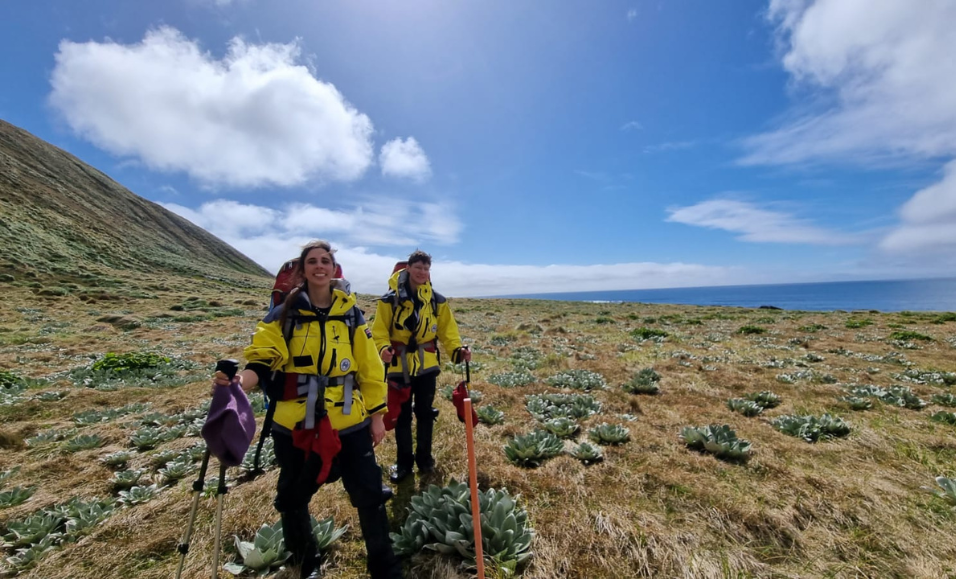 Cait and Sam in the field. Credit: Maggie Smith 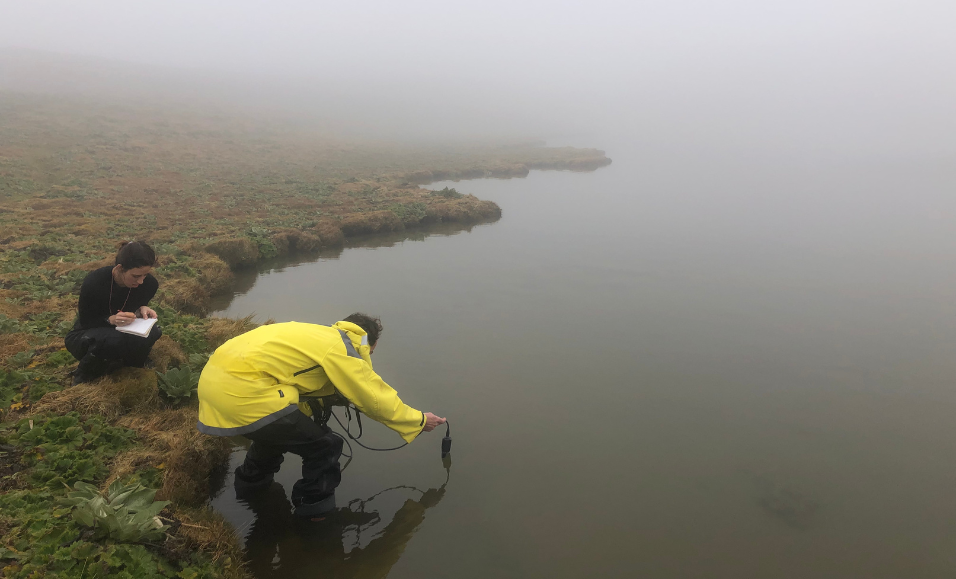 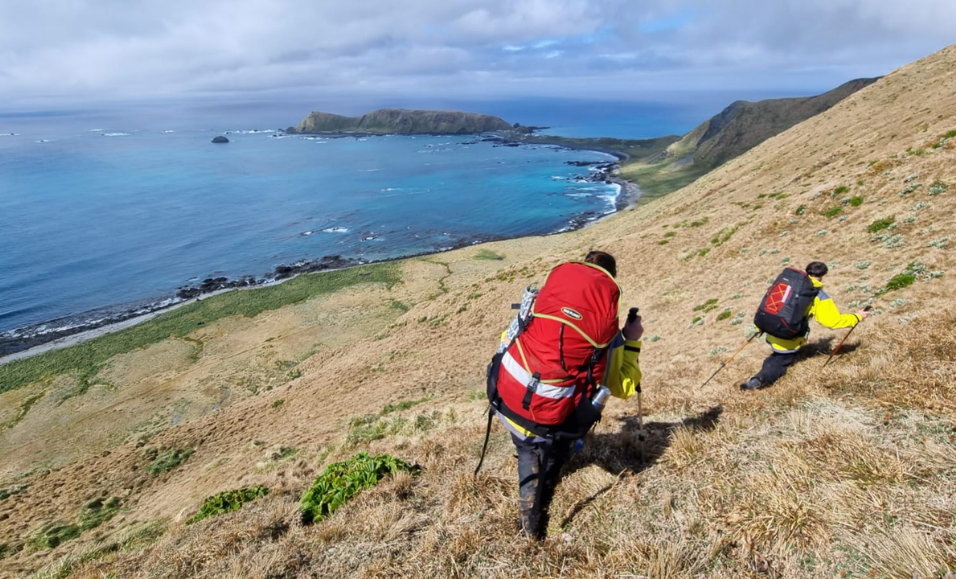 To get anywhere on the island the team generally has to hike there. Credit: Maggie Smith

On 21 October, four SAEF scientists departed Hobart aboard a ship setting sail for Macquarie Island, a tiny speck of land about halfway between Tasmania and Antarctica. They’ve swapped an Australian summer for the rare opportunity to spend six months on this sub-Antarctic island, where at this time of year the average temperature is between 5°C and 8°C and accompanied by strong westerly winds, heavy cloud and high rainfall.

The team on this expedition includes research officer Jez Bird (Monash University), PhD student Sam Beale (La Trobe University), PhD student Cait Selfe (QUT) and Masters student, Maggie Smith (QUT). They’ve joined a team of 23 other expeditioners, who are mainly a mix of operational staff and tradespeople, to carry out a range of scientific fieldwork across the island supported by the Australian Antarctic Program. This work will contribute to research that will  help us better understand how climate change and the eradication of invasive species are impacting the island’s environment and biodiversity.  After spending a unique Christmas and New Years on the island, they’re almost at the halfway point of their expedition and have a bunch of news to share.

While Jez has spent over a year on Macquarie Island in 2017-2018 completing his PhD for a study of burrowing petrels, for Sam, Cait and Maggie it is their first time visiting the island. What struck them all in their first weeks was how while the island is isolated in terms of its location and human population, the opposite is true of its animal population. Due to the rich feeding grounds in the Southern Ocean that surrounds it, the island attracts large congregations of wildlife.

“Everywhere you are you’re surrounded by an unbelievable abundance of seabirds, seals, megaherbs, and the natural beauty is stunning – except when we’re out in the driving wind and rain with low visibility – not as rare as you might hope,” explains Jez.

While there are strict regulations in place that guide the distances expeditioners must keep from the wildlife, sometimes it’s the animals themselves who break the rules. Elephant seals and Gentoo penguins are known to take refuge around buildings on station and often they’ll sneak up on an expeditioner catching them unaware or be found lying in the middle of a pathway, making it difficult to always stick to the distance rules.

“It’s amazing to be in a place where the flora and fauna are just allowed to exist and there is (almost) no interference from people,” said Sam.

Getting out into the field

Before the team could get stuck into their fieldwork, they had to complete orientation and field training. This involved working with the Tasmania Parks and Wildlife Service rangers and Australian Antarctic Division personnel on station to develop the skills that would allow them to travel safely around the island, use unfamiliar equipment and complete fieldwork according to government regulations and their permits.

An important step for the team was achieving “trip leader” status, which enables them to go into the field solo without a field training officer.

“This allows us to have a lot more freedom and really get into our science properly,” explains Sam.

“Us scientists are really lucky to be able to go out and spend a decent amount of time in the field and experience the whole island. There is also a lot of walking and climbing steep hills involved so you get pretty fatigued after a few full days of fieldwork.”

“This is a rare chance to undertake scientific research on Macquarie Island so we’re getting as much done as we can,” said Jez.

For six months, the team will be completing a range of fieldwork related to several different areas of science. Jez and Maggie are both doing work to help us understand how the island is recovering following the eradication of rabbits, rats and mice in 2014.

“I am resurveying three invasive plant species across the island to see how their distribution and abundance is changing following the removal of introduced mammals, particularly rabbits, which had such a dramatic impact on vegetation across the island,” explains Jez.

Maggie is collecting peat cores that through chemical analysis will provide information on the climatic and ecological changes that have occurred over thousands of years. Back in the lab, she’ll look at the long-term changes to threatened seabird species, including blue petrels, grey petrels and Antarctic prions, which were heavily impacted by the arrival of invasive species aboard ships in the 1800’s. It’s hoped that this will provide insights into how many of these seabirds were on the island prior to that time.

Climate change is also a well known pressure impacting the island’s environment and biodiversity, and much of their work will be focused on understanding this.

Cait and Maggie are collecting lake water samples and extracting sediment cores from lake beds across the island. These samples will feed into their work studying historic climate change by analysing long-term changes in lake chemistry linked to climatic variability.

“Our fieldwork involves three laps of the island collecting water samples from 44 lakes on the island’s plateau. We collect and filter water from each lake for subsequent chemical analysis in the lab when we’re back in Tasmania,” explains Cait.

Meanwhile, Sam is surveying the Critically Endangered cushion plant Azorella macquariensis to investigate the rate and causes of ongoing dieback. He is also measuring plant traits such as leaf size in native species to investigate how these are determined by climate and therefore how species might respond and adapt to future climate change. All going well this will make up the main part of his PhD project. 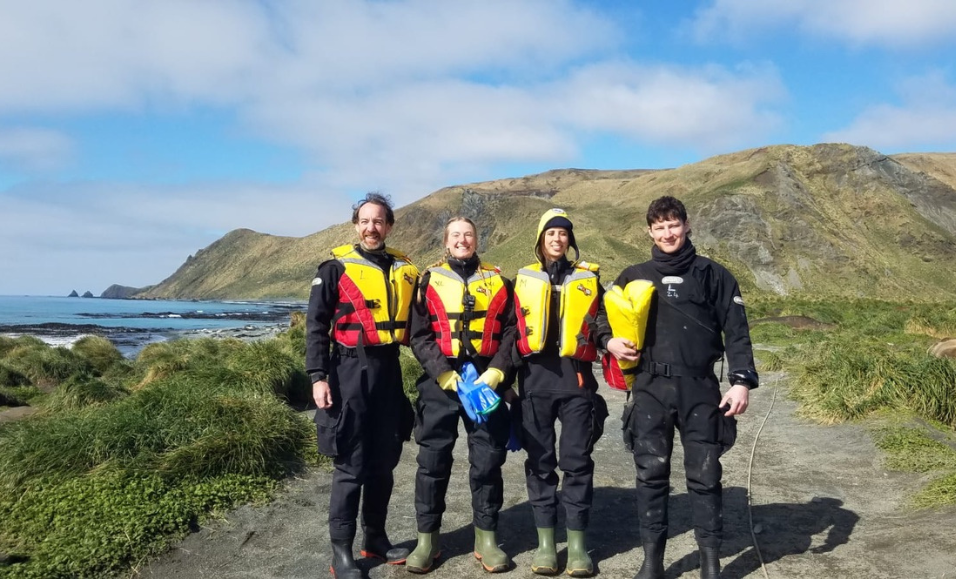 Jez, Maggie, Cait and Sam suited up to head out on the boat to Green Gorge. 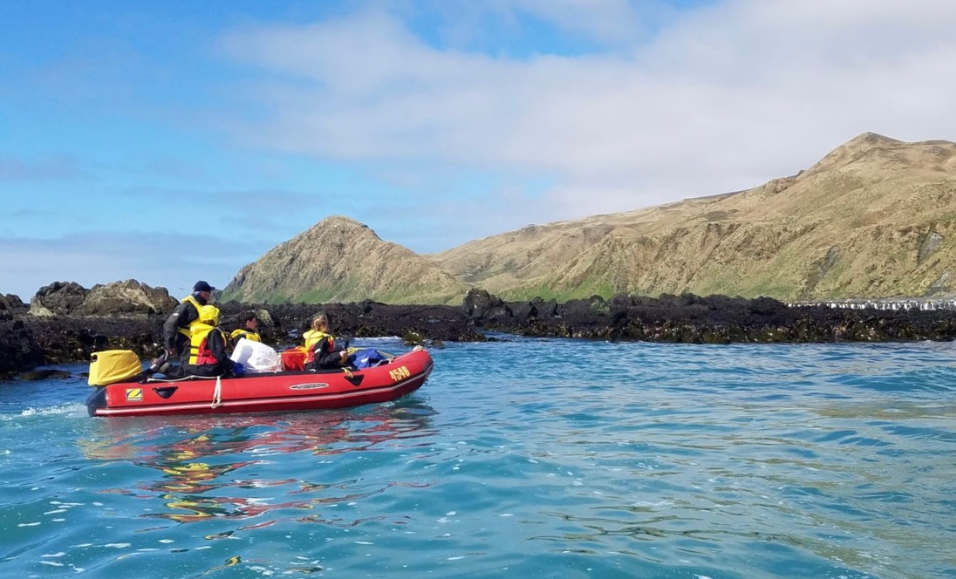 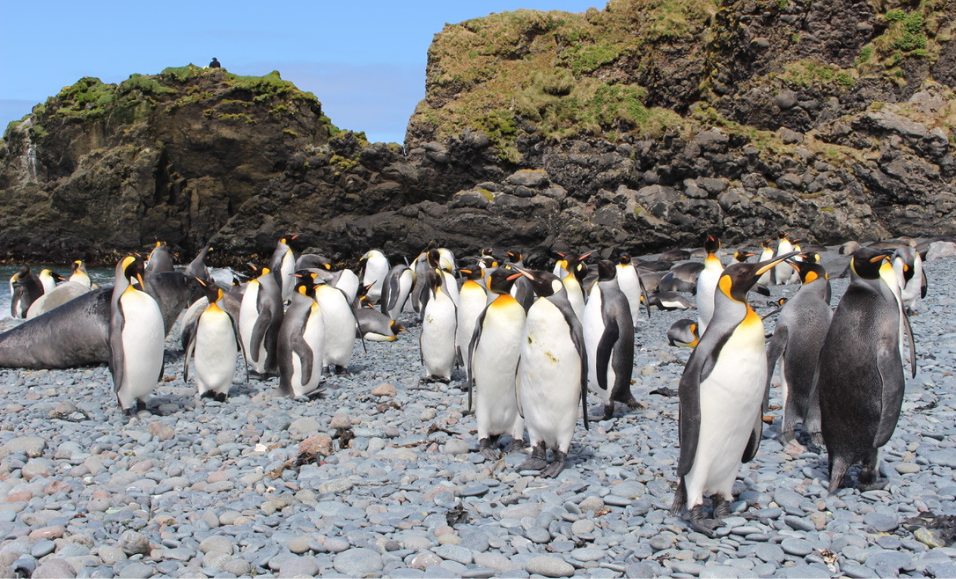 All aboard for Green Gorge

While the island is only 34 km long and 5 km wide at its widest point, it’s quite mountainous which means to travel anywhere on the island the main mode of transport is to hike. This presented a challenge for the team in figuring out how to get all their equipment to sampling sites particularly when the weather is wild. Alongside their 10 kg survival kits that they must always carry with them, Cait and Maggie also have enough bottles to sample 150 L of water, two 16 kg pack rafts, and a 13 kg lake corer.

Fortunately a rare sunny day provided an opportunity to solve this problem and use the other main form of transport, the Zodiac boat. This also provided one of the highlights of their expedition so far, a boat trip from station to Green Gorge Hut loaded with all their equipment.

“It was a sunny, calm day, which almost never happens on Macca. and we got to explore the coast a bit and get a different perspective of the island,” explains Sam.

“Landing the boats at Green Gorge was a mission in itself, even on a good day, and required all-hands-on-deck. Unloading all the heavy gear was no easy feat either, and the king penguins on the beach were content to just observe with great interest but not offer a hand (or a flipper).”

Getting all this gear to Green Gorge means that the team have a more central location on the island to work out of and will make this season’s logistics much easier.

With two months gone and another four to go, let’s hope the team gets more decent weather for the benefit of their science, and their off-duty activities.

An expedition to the sub-Antarctic Islands

PhD student Kita Williams shares her voyage to the sub-Antarctic Islands with Heritage...

New research identifies 10 conservation strategies that could benefit up to 84%...